We've had some rain so I've turned my attention indoors for a while. There are lots of little projects in the kitchen that need finishing up.

The window weights in the big kitchen window were broken so that was the first thing I did. The window casings were already off from when we gutted the kitchen so it was fairly easy to remove the window and re-rope the weights. 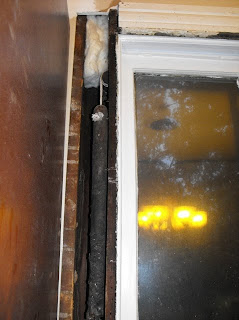 The sill was damaged so I removed it so I could repair it. I didn't get a picture of it when it was broken but it had split on the left side about 6 inches to a knot and broken off into a couple of pieces. I glued and clamped it back together and put about six 2" nailgun nails into it.

Here is a picture after I filled the knot hole in with putty: 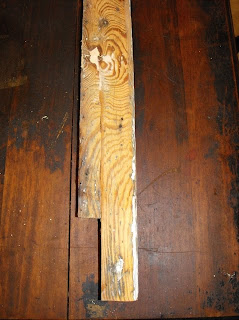 Then I filled in all the cracks and holes with wood putty: 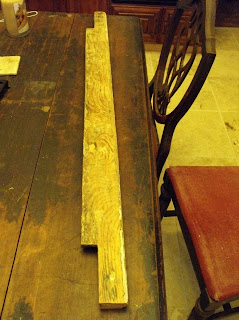 All that's left to do is give it a final sanding and reinstall it.

The next thing I did was finish sheetrocking the kitchen. Here is one of the areas that wasn't finished: 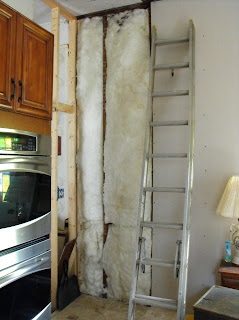 And here it is finished: 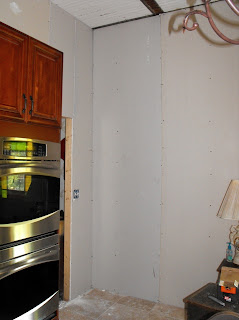 I also finished the area above the kitchen door: 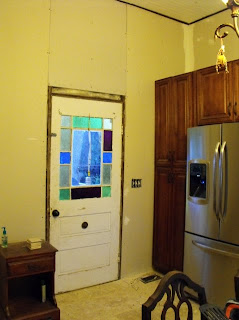 Now all that's left to do on the walls is mud, sand and paint.
Posted by Jason and Heather at 9:06 AM

AHHH!!! I have a door just like yours in my house, with the stained glass squares. Your colors are so much better then mine- I secretly hate that door.

Everything looks like its moving along nicely! fortunately we only have one of those weighted windows left in the house and its been painted over so many times its useless.

Looked over your blog and as you finish working on the kitchen, you might want to check out our blogger contest on Old House Web. We’re running a best home blogger contest (for prize of $250 gift certificate to Lowe’s and chance to be a paid contributor to our blog) I think you’d be a great candidate. Please check it out:
http://www.oldhouseweb.com/blog/announcing-old-house-blogger-contest/