We decided to paint over the wallpaper in the parlor. You may remember about a year and a half ago I was trying to scrub the wallpaper. It cleaned up ok but it was still discolored. 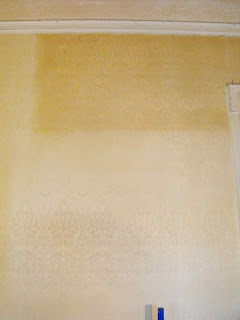 It doesnt look so bad in the picture but in person it wasn't good. So we decided to go ahead and paint over it. In the end I'm glad we decided to do it. You can still see the wallpaper pattern through the paint and the color is what the wallpaper would have looked like originally. 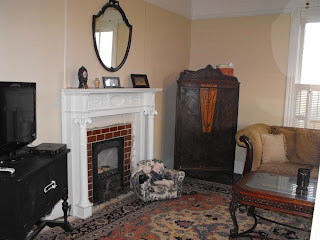 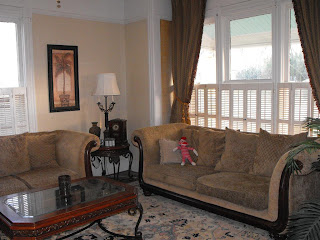 You cant see the wallpaper pattern in the pictures but you can see it in person.

You can see the one area I didn't paint behind the curtain. I still need to go back and paint that.

You may also notice that the fireplace mantle is different than what was originally here. We found this mantle in an antique shop and it turns out it came from an old victorian house in Fayetteville that I used to drive by every day. It was destroyed in a tornado about 6 years ago.

The mantle has many layers of paint on it, so many that much of the detail is obscured. I will eventually have the mantle dipped to remove it all but for now I put two coats of trim paint on it to clean it up.

AUTGA5GMTKMU
Posted by Jason and Heather at 8:43 AM 3 comments:

Another project I completed is the doorway between the dining room and the kitchen. This is what it looked like before: 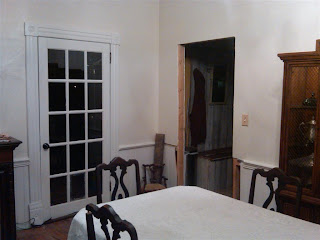 The first thing I did was to make and install the threshold. The kitchen floor is about 2" higher than the dining room floor because of all the leveling I had to do in the kitchen.

I used a piece of 5 1/4" oak flooring for the threshold, I cut both ends of the board at angles because the threshold will lay at an angle.

Once it was cut I cut and installed a shim piece to go below the threshold: 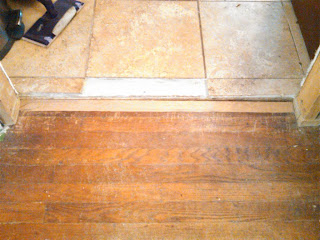 Then I installed the threshold: 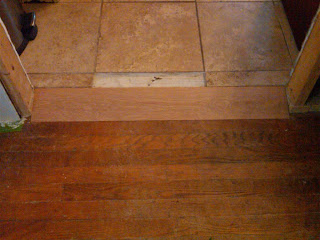 With that done I installed the door casing. I found some casing that is very similar to the original casing in the house. 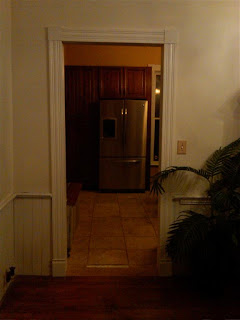 The casing is about an inch smaller than the original, I didn't have any rosettes that matched so I cut some blocks out of the oak flooring.

Once I have new casing cut to match the originals I will re-frame this doorway.
Posted by Jason and Heather at 9:16 AM 4 comments:

The main bathroom is another project that I have been working on. Last week I finished cutting in the primer on the walls, then I scraped all the trim. 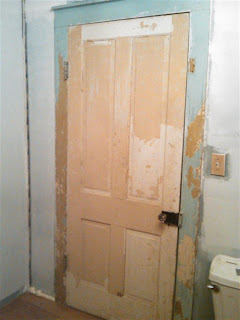 One of the neat things I found here was the old exterior trim color, it's the brown/olive looking color on the door casing. This room used to be a side porch. I know this was an exterior color because when they closed the porch in and hung the interior door they just slapped the hinges up on the casing, you can see where they were on the casing on the right. That color was directly underneath.

Once the scraping was done I primered and painted all the trim, then painted the walls. 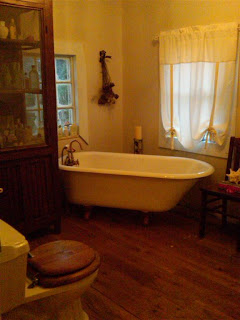 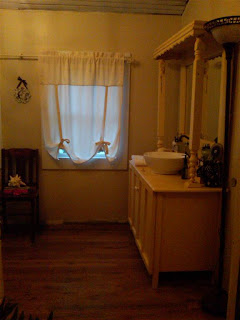 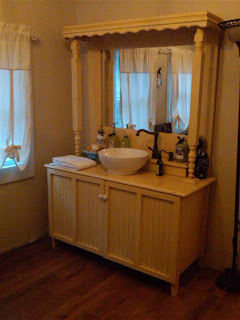 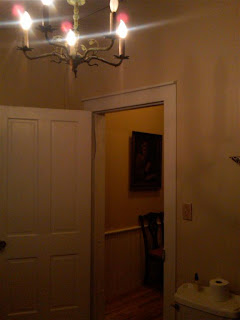 Sorry for the pics, it's very hard to get decent shots in this room.

Left to do still is install 1/4 round and baseboards, caulk, and paint the ceiling.
Posted by Jason and Heather at 8:11 AM 2 comments: