I am constantly researching the history of the house. A few years back I pulled all the mantles off the walls looking for things that might have fallen behind the mantle. I found many things, one of them I already posted about was a wedding invitation from 1904. I also found two other letters from 1904. These were in much worse condition than the wedding invitation so I put them up and have just recently found them again.

The letters have lots of holes in them, especially the second one which I am still trying to fully decipher.

The first one is a letter from the Lagrange Sanatorium to Maggie May Aycock about someone named Morgan:

Note: To view the images in their full resolution in Firefox, click on the image, then right click the  image and click on view image. You will then have the option of clicking the image again to make it full size (the pointer will look like a magnifying glass). I hate the way blogger has changed how images are shown. 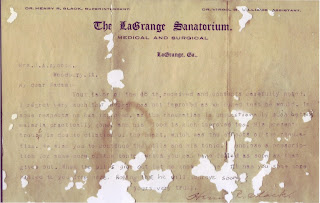 At first I thought maybe the letter was about her father, Rev. Thomas Guinn Morgan, but he had died the year before in 1904. I have his obituary written out in the House History tab.

Then I looked at the prescription that was enclosed with the letter: 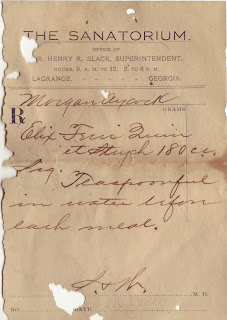 Morgan Aycock. I looked the name up on Ancestry but could not find any information about him.

The letter is written by a Dr Henry R. Slack, a man of some note in his time. 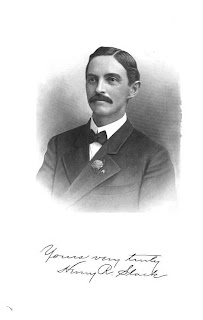 Here is a picture of the Lagrange Sanatorium from 1907: 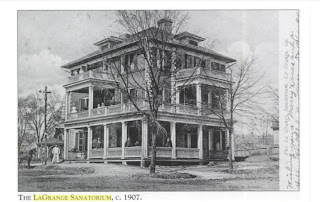 Then I started trying to decipher the second letter. It was obvious that it was a sympathy letter.  I finally realized that one of the words that was very hard to read was Morgan. Here is what I have so far: 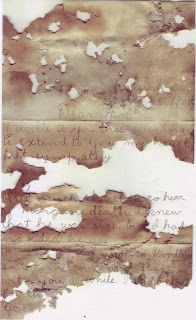 This letter is dated just 6 days after the one from Dr Slack. So now I know why the prescription was never filled. It is addressed to Opal who is one of Maggie's daughters.

I went back and started going over the Aycock records I have to try to find out who Morgan was. Then I realized that in the 1900 census Maggie and John Aycock's first born was listed as Willie M. Aycock.

I looked him up on Ancestry but could only find him in the 1900 census. He was born in 1885 in Griffin, Ga. I know he was born in Griffin because i know the Aycocks lived there then. The only other record of him would have been the 1890 census. Most of the 1890 census was destroyed in a fire including all of the Georgia records.

I'm assuming that Willie M. Aycock was William Morgan Aycock. I don't think it's that much of a leap to come to that conclusion. Maggie's maiden name was Morgan. Back in the day it was common for people to name a child's middle name after the mothers maiden name. Also, after 1900 he just disappears. I can find records on most of the other Aycock's after 1900 but none of him.

After doing a little more research I believe that Morgan died of heart failure caused by Rheumatic Fever. The first letter mentions that his Rheumatism is getting much better but that his current trouble is with dilation of the heart caused by the Rheumatism. The word Rheumatism is a catch-all for many ailments, the most common one being Arthritis. Rheumatic fever is another one. It can cause inflammation of the heart and heart failure according to the Wikipedia article I found on it.

The prescription is for an elixer, "Elix Ferri Quin et Strych". Basically it is Quinine, which is for Malaria, and Strychnine, which is a poison but was used as a stimulant. I think the Strychnine was prescribed to him for his heart.

I believe he died here in the house because in the first letter the Dr. is telling Mrs. Aycock to continue giving him his pills and elixer, plus the prescription that was in the letter so he definitely wasn't an in-patient in the hospital.

The period of time the Aycocks lived in this house (1899-1904) wasn't a particularly good time for them. In 1902 John Aycock's Planing Mill burned down. I believe he had some financial and legal troubles from this because of some letters to his attorney that I have from around this time. In 1903 Maggie's father dies, also in the house I believe. Then their first born son dies in 1904 at the age of 19.

Edit: I have just updated the House History tab with more information on the Aycocks.
Posted by Jason and Heather at 8:10 AM 5 comments:

We've been doing a lot of work on the house lately. One of the projects has been the upstairs hall.

This is what it looked like when we bought the house: 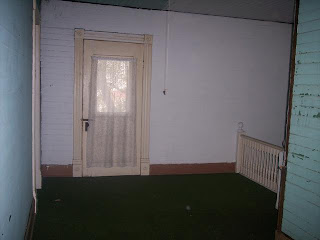 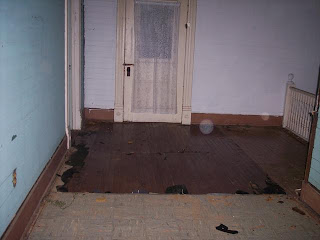 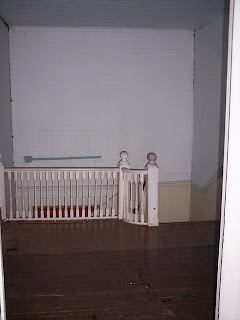 And here are some current pictures: 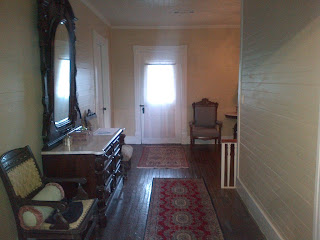 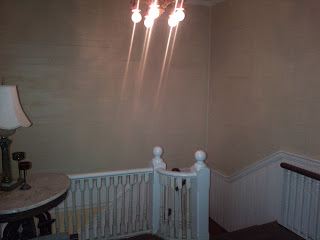 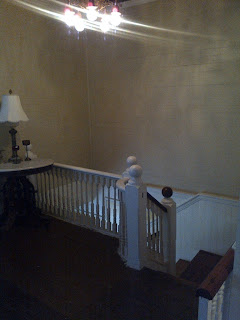 For the past two weeks I've been running electrical to new lights and outlets, putting up crown and trim, caulking the cracks in the walls and ceilings, and painting.

Here are pictures of two of the upstairs bedrooms: 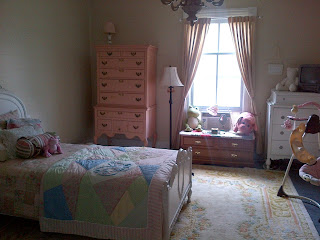 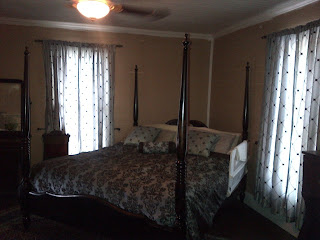 The first is our daughters and the second is ours. I have not cut in around the trim in our room yet.

I dont have any in progress shots because I was too busy to get any.

I'm going to throw in a picture taken from the Parlor looking into the Foyer: 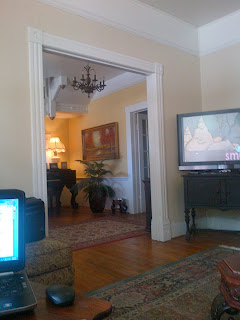