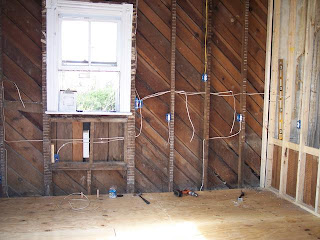 Next I had to seal up all the holes in the walls with Great Stuff. 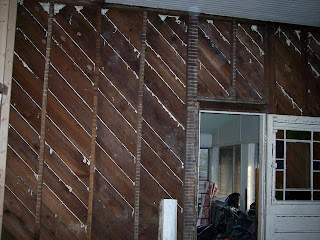 With that done I began insulating the walls. I'm using R19. 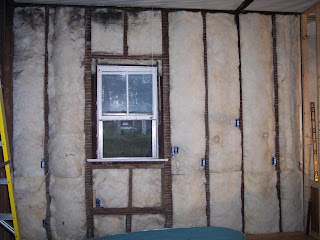 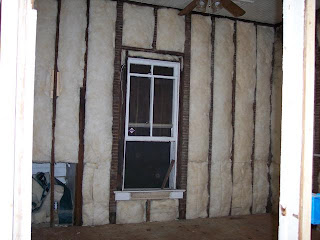 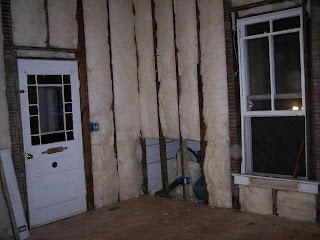 Tomorrow I'll be putting up the sheetrock.
Posted by Jason and Heather at 9:48 PM No comments:

Yesterday was a pretty good day for progress. The HVAC/Plumbers were out on the job for the first time. They installed the plumbing in the kitchen walls so I can now go ahead and put the insulation and sheetrock up. I'll be doing that this weekend. I was also able to get the sub floor finished in the kitchen. 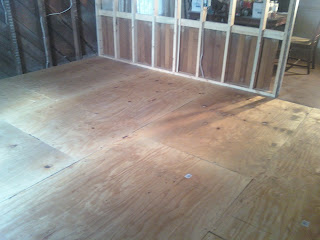 I also began demoing the main bathroom. A nice surprise was finding the original wainscoting behind the ugly tile. 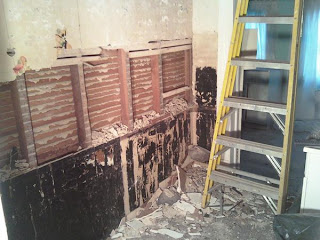 I'm demoing this wall because it will be used to run the plumbing upstairs. I also tore out the dropped ceiling. 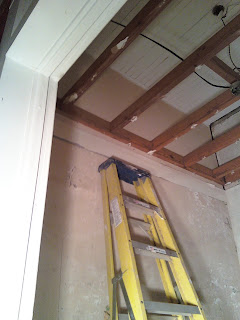 I found a couple interesting things on the walls, they appear to be stickers. 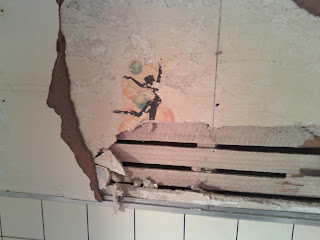 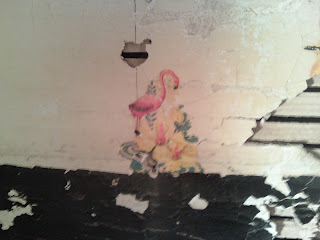 Some of our appliances were delivered yesterday also. 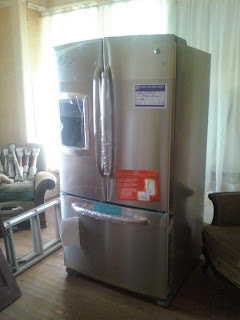 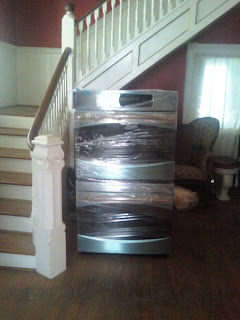 The dumpster was delivered the day before. When I opened the door to begin loading trash in it I found that it wasn't quite empty. 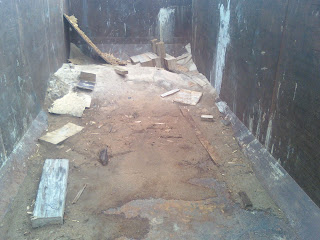 I called the dumpster company and talked to the guy who delivered it but he seemed to think that there wasn't enough debris left in it for him to have had to get up in there with a shovel to knock it loose. I told him that if I fill the dumpster up and run out of room because of that then we're going to have a problem. The pile is over 2 feet high and covers the back 1/3 of the dumpster.

This afternoon will be more demo work and hauling trash out to the dumpster.
Posted by Jason and Heather at 9:08 AM 1 comment:

On Sunday I started working on the kitchen subfloor. There were a lot of holes in the floor from moving the wall and it wasn't level. I had to remove most of the oak flooring that used to be part of the dining room as it was too high. 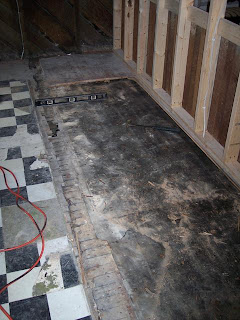 Then I had to add plywood of differing thicknesses to the area to build it up level. 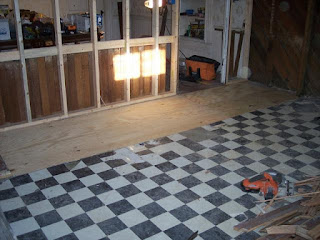 Then I added plywood to the other low area to level it off. 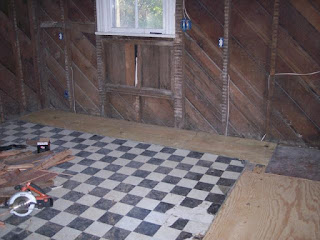 With the floor now level I will be adding 1/2" plywood over the entire floor then putting the backer board on top of that.

We went back out on Monday to work on the upstairs bathroom. It needed to be demoed so the plumbers can rough in the new plumbing. Here is a before shot. 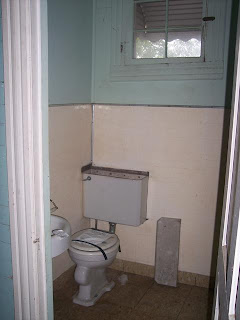 Here is after removing all the paneling that covered the walls and ceiling. 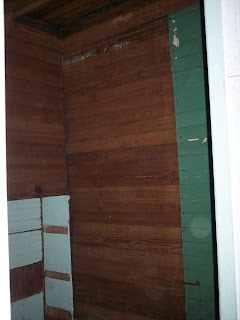 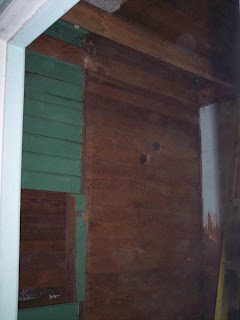 With the old paneling removed I was able to see that there was originally a closet that was smaller in size here. The green paint would have been the hallway and the unpainted boards were in the closet. It looks like in 1937 (the date on the tub, toilet, and sink) the closet wall was moved out a few feet to add the bathroom.

I also found lots of remnants of the original wallpaper that was in the hallway. 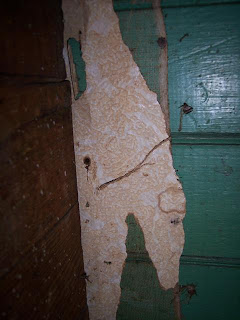 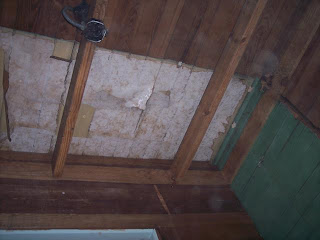 In the first picture you can see the cheesecloth that they hung the wallpaper on.

Yesterday we found a really good deal on a refrigerator. It was originally close to $3000 but was marked down to $1999. I told the manager that I would be paying cash and asked if he would take $1400 and he did! Here is a pic of the fridge, I found these pics online. 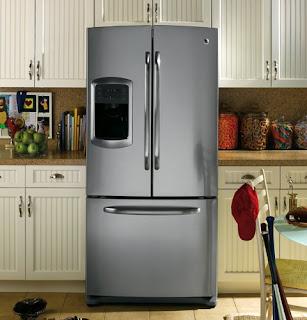 Tomorrow I will be picking up our new double ovens, I'm getting a really good deal on it too. It was originally listed at over $3000 but I'm getting it for $1199. Both appliances are completely new in the box. 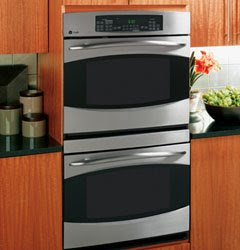 Today I spent the afternoon underneath the house removing all the old cast iron plumbing and the old metal radiator piping in preparation for the plumbers, they will be starting on Thursday. I wasn't able to get all of it removed but I got a lot of it done.

Our 40 yd dumpster should be on site tomorrow so I can start filling it with all the trash that has accumulated so far.
Posted by Jason and Heather at 9:37 AM 1 comment:

On Saturday we went and picked up the travertine. We bought a crate of 16x16 tiles. There are 160 tiles per crate. This should be enough for our kitchen and hopefully both baths. We also bought 10 boxes of 4x4 travertine backsplash. The floor tiles were $1.49 sq. ft. and the backsplash was $0.25 each! 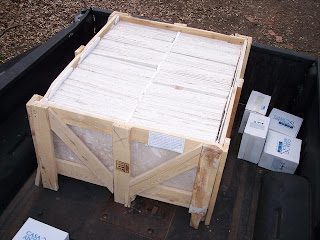 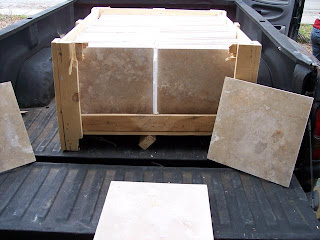 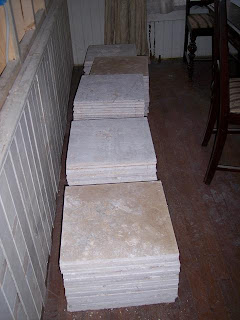 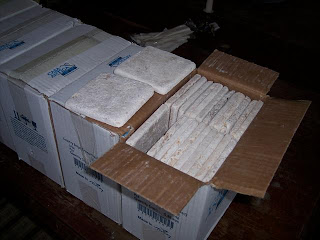 We also went and looked at some appliances but the store was out of the ones we wanted so we'll have to find something else.

The work on the kitchen flooring should begin this weekend.
Posted by Jason and Heather at 9:07 AM No comments:

We were back out at the house over the weekend but it was so nice out that we decided to work outside. We did a lot of yard work last January and February but it got really overgrown over the summer again.

I forgot to take a before picture, this one is after I had already begun working. 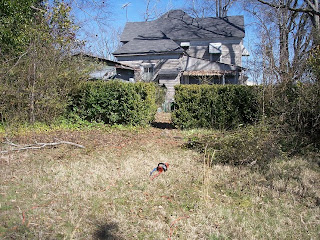 Here are a few after shots: 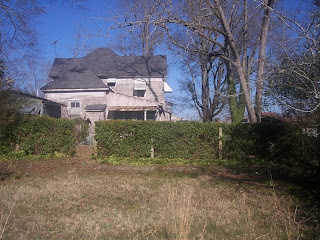 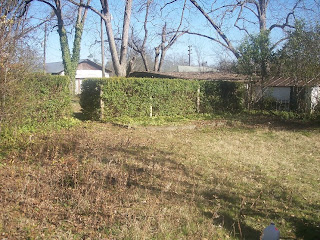 We're far from done.
Posted by Jason and Heather at 8:50 AM No comments: