Then I installed the panel and began installing the circuits. 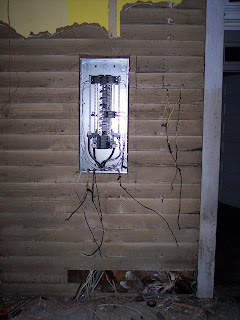 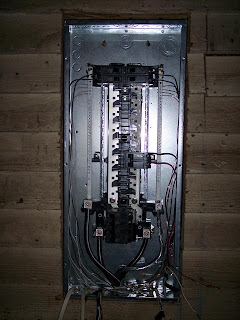 That was as far as I got today. I have a pretty busy week ahead for work so it's doubtful that I'll make it back out to Woodbury until the weekend.
Posted by Jason and Heather at 7:38 PM No comments:

I spent most of the day today under the house tearing out old wiring. It's very cramped under there, towards the back there is about 4' of room but near the front that drops to about 2' or less. I'm having to crawl around on my stomach in the dirt, which has the consistency of baby powder so it sticks like crazy to everything.

I also took every outlet apart to see if it had old wiring or newer wiring so I would know how many new circuits I'll have to run. At least one outlet in each room was Knob & Tube, most of the others were very old metal conduit type wiring. All these were ripped out so new romex could be run. The two shots below are typical of most outlets in the house: 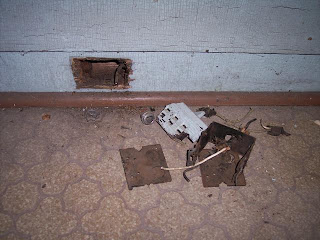 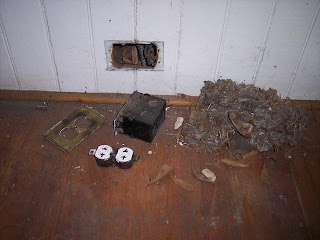 I'll be installing new boxes, new romex, and new outlets to replace all the old outlets. There are also a lot of outlets we want to add but that can wait until we have the power on.

There are a number of outlets I cant get to from underneath the house because of the old steam pipes, so tomorrow I'll be bringing my sawzall and extension cords. The neighbor is letting me use his power for this. I'll be cutting the steam pipes out of the way. 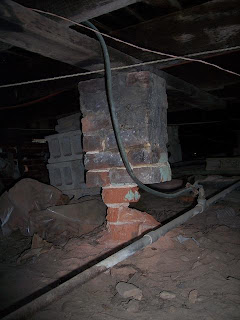 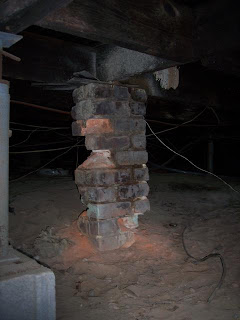 These dont look too safe. Luckily they are under the portion of the house that used to be a porch. This area will be torn down and a deck built in it's place.
Posted by Jason and Heather at 7:34 PM 2 comments:

We've finally gotten back to work on the house. We spent the day today in Woodbury, I've been working on the electrical wiring in the house in the hopes of getting the power turned on soon.

I'm installing a new 200 amp electrical panel. The old panel is a 100 amp fuse panel, there is also a second panel upstairs that I will be replacing. I will be relocating it to the attic and replacing it with a 100 amp sub-panel.

The room that this is in was going to be a sun room but we've decided to go ahead and make it a laundry room instead. Here is the wall with the electrical panel: 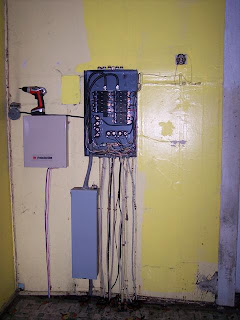 It was surface mounted to the wall and all the wiring was just run along the wall. The panel below the main panel it a 200 amp breaker panel and the one to the left is an alarm panel. All of this had to be removed: 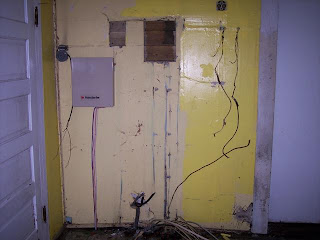 This room was originally a porch so the wall is drywall over external siding. I should also mention that there is a bad leak in the roof in this room. There is a lot of mold and rot. I tore the drywall down since it was moldy and looked horrible: 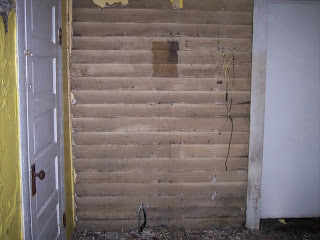 I think it looks a lot better with the siding anyways. Next I found the studs and traced out the outline of the panel in between two of them, then cut the opening out: 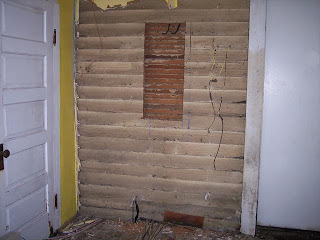 I'm replacing the line from the meter to the panel as the old one was a 100 amp line. I went under the house to drill the holes for the wiring into the wall and found my first mistake. The spot directly under where the panel is has a brick pier. There's no way I can run the wires up into the wall from underneath and I've already cut the hole for the panel. Crap!!

What I've decided to do is run the lines up through the floor at the edge of the wall like it originally was but to then run the lines into the wall down at the floor level. I'll build a small cabinet or built-in bench to cover it up: 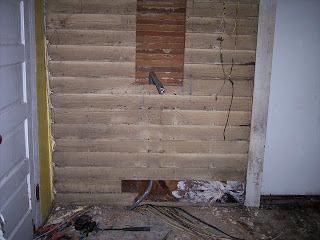 Wrestling four 2 gauge wires bundled together into 90 degree turns is hell by the way. This was as far as I got today. Tomorrow morning we'll be out there bright and early. There are about 6 circuits that I'll need to replace as they are cracked and brittle.

Once the downstairs wiring is in place I'll get the power turned on then the real work can begin!
Posted by Jason and Heather at 7:38 PM 1 comment: